Written in the Financial Stars

by Louw Barnardt
in Financial Reporting
0

Financial statements: Those thick boring packs of paper that you pay your auditor way too much to go over every year. The ones that come out six months after all the action has happened. Yes, the packs that collect dust in your cupboard because they are full of complex words and numbers that can only be understood by the partner that signed them off and the bank manager.

But what if this could be different? What if you could read and analyse your financials in a way that enables you to clearly recognise the past, understand the present and see the future?

Seeing into the future

Financial Statement Analysis is the process of analysing a company’s financial statements to gain an understanding of the financial health of the company and to enable better decision-making.

Financial statements only record data; proper financial statement analysis makes the data useful to the entrepreneur. It enables you to understand profitability and its drivers, to foresee cash flow and liquidity problems, to better manage your assets and resources and to identify and mitigate risk.

Sound a bit complicated? It doesn’t need to be. Starting with the basics, an entrepreneur can already gain invaluable information about trends and risks in his business.

This enables one to see growth patterns clearly, and see the difference in growth of specific line items when compared to that of others.

Index Analysis : Choosing a basis year as 100% and stating all other years as a change in percentage 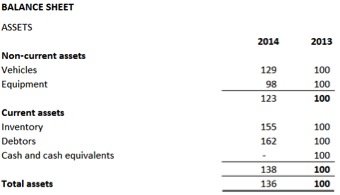 This is another simple way to clearly see growth patterns over various years.

Common-Size Analysis: Stating total assets in the balance sheet as 100 and showing all other line items as a portion thereof.

The same goes for revenue in the income statement. 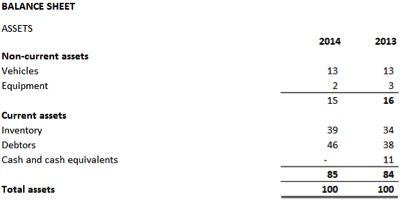 This helps one identify line items that are material when compared to total assets or revenue. It is a nice tool to identify risk areas.

The above three methods can be applied equally effectively to both the income statement and balance sheet.

Once we understand the trends in our business and the composition of our financial statements we can get to the juicy stuff:

Ratio analysis is a number of different calculations that one can apply to financial information to obtain useful information and make valuable conclusions. They can predominantly be classified as and use for the following:

Liquidity ratios: Measuring the company’s ability to meet short term obligations (whether or not current assets are enough to pay for creditors and tax in the short term).

Profitability ratios: Measuring the company’s ability to generate profit from its assets (whether or not assets are being used to generate adequate revenue and profit).

Examples of these ratios and pointers on their interpretation can easily be found with a quick search and have been excluded for the purposes of this article. But let’s make ratio analysis practical with one thorough example, using the net profit ratio (one of the basic profitability ratios).

Consider the following extract from an income statement:

At the first glance, the entrepreneur sees a healthy increase in income of around 40% per year. He also sees that profit has increased with 19% in 2013 and 31% in 2014, leaving him feeling quite content. But let’s dig a little deeper, using the net profit ratio.

Doing the calculation as above, the net profit ratios for each year, starting with 2012, decreases from 7,3% to 6,4% in 2013 and to 5,9% in 2014. This shows a negative trend, alerting the entrepreneur to look closer. He’ll see that his expense increase is stable at around 34% (less than increases in income), but that his cost of sales has actually increased by more than income (around 47%). Upon investigation, he has found that his cost of sales have grown so fast because his suppliers are asking higher prices, in turn because of their higher import costs due to the weakening of the rand.

Our entrepreneur realises that if he does not do something about his cost of sales structure, his business will soon be making losses because of the increases in cost of sales, even though his revenue is growing. This foresight will enable him to find better suppliers or to start importing himself in order to cut cost of sales, ensuring that his business’ bottom line will keep growing in future.

It’s no crystal ball, but good solid financial analysis has enabled him to see the future and adapt ahead of time in order to drive his profits in 2015 and beyond.

For some first-hand experience in financial statement analysis, come join one of our FREE financial function workshops hosted at the Bandwidth Barn on a monthly basis.

Louw Barnardt CA(SA) is the 2018 Sanlam/Business Partners Emerging Entrepreneur of the Year® and a Top 35 under 35 Chartered Accountant. As co-founder at Outsourced CFO, Louw specialises in CFO, cloud accounting and fundraising-related topics for scaling companies.