Why Conflict Resolution Is A Matter Of Matching Values

7 Steps To Building The Perfect Team In Your Business

How Outsourcing HR Can Optimise Your Human Capital

How You Can Give Back To Your Employees

Wherever you find people working or interacting within some sort of group or relationship, you will find conflict.

In the workplace, in homes, at schools and between the most loving of families or couples. As a result, conflict resolution is essential to any happy and productive relationship – whether it be within an office or when on holiday with a spouse.

Resolving conflict, and also mitigating the likelihood of conflict, is an important and ongoing process for us all.

At its core, conflict can be whittled down to a difference in values – and the resulting expectations – between the parties involved.

In my view, every conflict is resolvable. When working with companies, at every level, I follow a very specific process when addressing and resolving even the most deeply entrenched of disputes.

To begin with, I seek to understand the core values of each party involved, and what their fundamental hopes and expectations are.

With a deeper understanding of each person’s guiding values, I then carry out a thorough values and expectations assessment – and find out where these differ from what is being experienced, perceived or received.

At this point, it is imperative to determine whether the demands or expectations are realistic (grounded in facts, logic and reason), or unrealistic (based on fantasy). Sometimes the demands are unobtainable and simply fictitious, not factually based.

In these cases, effective conflict resolution rests on the ability to educate either one or more parties as to the reality of the situation, always keeping in mind what he/she values and aspires to. The problem, in essence, is often one of education and awareness, above all else.

At every step in this process, one needs to master the art of caring enough about the people involved and understanding what truly matters to them.

Instead of merely being reactive, the approach needs to be reflective – with everyone involved taking the opportunity to not only reassess and relook at their own values and expectations, but all of those involved.

The more open, receptive and communicative the process, the better the chances of resolving conflicts both quickly and effectively. 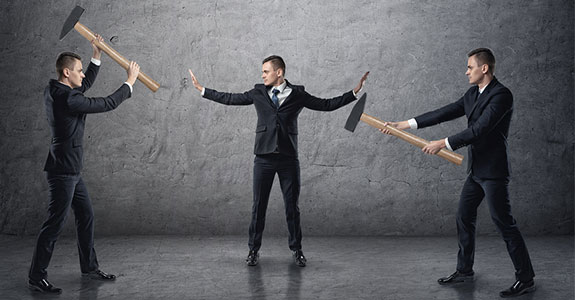 With special regards to conflict resolution in the workplace, it is important for each party to not only consider their individual needs and expectations, but also those of the company and its various stakeholders. Ultimately, if the company or group comes up against an insurmountable obstacle, everyone suffers the consequences.

By way of example, I once worked with a woman who was making USD 40, 000 per month, and wanted a pay raise.

Although company management acknowledged that she did indeed deserve a raise, they made it clear to her that if they suddenly increased her pay, it would lead to discontent and possible mutiny amongst her colleagues.

When this was explained to her, she calmed down and agreed to an incremental salary increase based on productivity. So the outcome was positive for the individual, as well as the company.

When debating executive pay, which is a hot button issue worldwide, the same reflective and empathetic approach should be adopted.

Will it serve the company in question to cut the executive pay, and possibly lose a good leader? Or is it in the interests of the entire organisation to retain a CEO who is particularly talented, and thus requiring high pay?

From mediating between mid-level managers around business strategy to putting out fires between global leaders, conflict resolution is a matter of identifying the values and expectations at play – and working out how and where a better match can be achieved.

As the best-selling author of nine books, all of which have been translated into 22 languages, Dr John Demartini is a health professional, an expert on human behaviour, the mind and body connection and on the laws of the universe. He is the Founder of the Demartini Institute and helps business leaders expand their thinking and businesses around the world.