7 Disgusting Businesses That Could Be Tomorrow’s Mega Money-Spinners

Our world is getting smaller, hotter and more crowded. Here are 7 gross ideas that could become tomorrow’s new multi-billion industries.

by Monique Verduyn
in Business Ideas
0

Launching in May 2014, Daily Table, a business founded by US entrepreneur Doug Rauch, will sell food that’s past its sell-by date, cosmetically blemished or food that is excess. All this food will be brought onsite, and the company will cook prepared meals with it. It’s going to be priced the same as junk food. Daily Table will also offer milk, eggs, bread and produce. 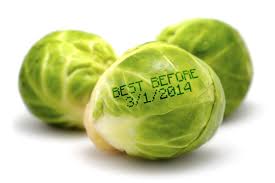 “Sell by” and “expiration” dates are just guidelines, say the experts

Most families know that they’re not giving their kids the nutrition they need, but many simply cannot afford to. Rauch aims to make healthy food available for the working poor at the same price as fast food by using expired food.

A recent report from the US Natural Resources Defence Council and Harvard Law School’s Food Law and Policy Clinic says Americans are prematurely throwing out food, largely because of confusion over what expiration dates actually mean. As much as 40% of food in the US – or the equivalent of $165 billion — is wasted, thrown away to fill landfills after spoiling in the refrigerator or pantry.

By selling food that is perfectly edible, with recently expired dates, Daily Table will help to eliminate some of the greenhouse gas (GHG) methane, which is given off by the 1,2 to 2 billion tons of wasted food thrown away by consumers in develop countries.

Doug told NPR in a recent interview that the name of the store will be called The Daily Table. The store will mostly sell fruit and vegetables and freshly prepared products. Rauch describes his new store as a hybrid between a grocery store and a restaurant.

Dr Mark Potter, who has been working on growing meat in a laboratory since 2008, served his first lab-grown hamburger in London last year. It was then cooked in butter and oil, and served to two lucky volunteers. The technology to grow fat cells is still lacking, making the meat rather high in protein. 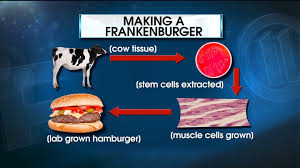 Growing meat in a petrie dish may not end world hunger any time soon, but more than one trillion cells can be grown from one cell taken from a cow – enough for ten tons of meat. The burger “lived” in a dish for three months – a shorter period of time than it takes for a cow to grow to adulthood.

Some 40% of the world’s land surface is used for the purposes of keeping all 7 billion of us fed. In addition, the Food and Agriculture Organisation estimates that livestock is responsible for about 18% of human-caused greenhouse gases. 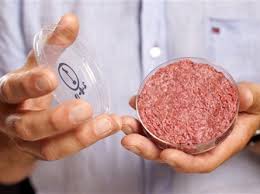 Potter took muscle stem cells from a cow’s shoulder in a gentle biopsy and grew them in calf serum, with micro-exercise so they wouldn’t be flabby. A total of 20 000 cells were then assembled into a burger, bound with bread crumbs and egg, coloured with beet juice and saffron, and presented it to the public.

Eating insects is good for you, apparently. They’re low in fat and are packed with protein. They’re also loaded with iron, thiamine and niacin, more commonly known as vitamins B1 and B3.

The UN Food and Agriculture Organisation released a report in 2013 which revealed that there are more than 1 900 edible insect species on Earth, hundreds of which are already part of the human diet in many countries. Around two billion people eat a wide variety of insects regularly, both cooked and raw. It’s only people in Western countries who gag at the idea.

Feeding insects to pets is not a new concept either. Population growth, climate change and agricultural and fishing needs are having a great impact on the global protein supply. The move to feed our pets the same as ourselves is adding greater demand for protein. A sustainable solution that is being considered is the use of insects as a protein source for pet food.

Could this be the future of food?

As the population approaches 8 billion, feeding all those hungry people is becoming increasingly difficult. A growing number of experts claim that people will soon have no choice but to eat insects.

Entomophagy, the consumption of insects as food, is a safe and healthy way to help reduce pest insects without using insecticides. Besides their nutritional value, insects are also abundant and environmentally sustainable. Farming and harvesting insects takes very little water and transport fuel compared to livestock, grains and even vegetables. 50kg of feed produces less than 5kg of beef. The same amount of feed would produce more than four times that amount in crickets. 30% of the world land mass is presently used to graze or raise food for livestock. Insects require much less land. They also convert food into protein much more efficiently than livestock do, which means they need to eat far less, and they emit far fewer greenhouse gases than most livestock.

Plus, gathering and farming insects can offer new forms of employment and income, especially in developing tropical countries where a lot of edible insects live.

That helps to explain why 36 African countries are “entomophagous,” as are 23 in the Americas, 29 in Asia, and 11 in Europe. In the future, insects could help to provide a sustainable food source. 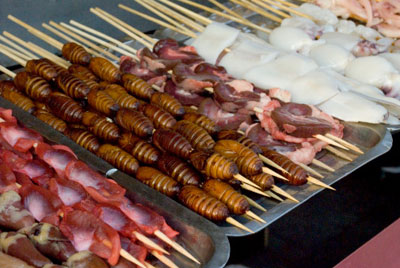 Before eating insects, they should be fed on fresh grains for a couple of days. This will clean out anything unpleasant they may have eaten. They can be eaten raw, but it’s safer to cook them and it will improve the taste.

One common rule of thumb you can follow is:

Four young Nigerian girls have invented a generator that runs on urine. The invention was first displayed in Lagos in 2012. A litre of urine can be used as fuel for generating six hours of electricity.

Power outages happen many times a day in Lagos, and not everyone can afford to have a backup generator. It’s possible that the girls’ idea can be applied beyond just power generators, as gasoline-powered internal combustion engines can be converted relatively easily to run on hydrogen.

Bringing pee power to the people 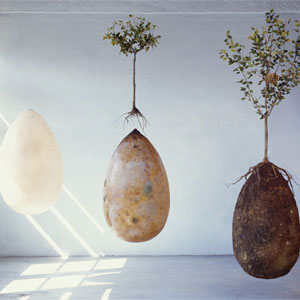 a. Dissolving your loved ones

Unless your loved one has specifically requested a Tibetan sky burial, there are currently two ways of disposing of dead bodies: they can be buried in the ground, or cremated.

However a new burial technique called resomation is being promoted by a group of pioneering Belgian scientists who have developed it as an environmentally friendly alternative to traditional burial methods.

For the eco-conscious, the disposal of the departed poses a dilemma. Both cremation and burial distribute contaminants into the natural atmosphere, particularly cremation which leads to the release of CO2.

According to UK company Resomation Ltd, The introduction of resomation would provide consumers with more choice in deciding how their body is taken care of after death. The energy needed for the process in the form of electricity and gas is less than one-seventh of the energy required for a cremation. In the UK up to 16% of all mercury is estimated to be emitted from crematoria because of the fillings in teeth — resomation produces no airborne mercury emissions. Sterile liquid is safely returned to the water cycle free from any traces of DNA. The introduction of a third means of dignified disposal has the potential to ease the pressure of burial space which, in many countries, is in short supply. 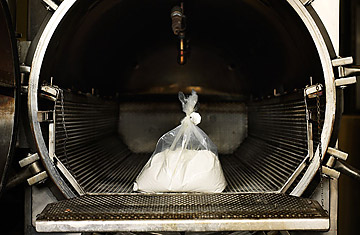 Departing the world in an eco-friendly flurry of dust

Resomation involves placing the corpse in a pressurised container filled with water and alkaline, allowing the body to essentially dissolve, leaving nothing behind but white dust.

B. Going back to the land

For more than 20 years, a fascinating consumer movement has been taking place in the UK — natural burial grounds are spraining up across the country. People are buried in biodegradable containers, without formaldehyde-based embalming fluid or synthetic ingredients, and returned to the earth to compost into soil nutrients with a forest of trees marking the spot. It’s an idea that’s taking off in Australia, New Zealand, the US, Europe and South Africa too.

It is estimated that in the US alone more than 60 000 tons of steel and 4,8 million gallons of embalming fluid are buried each year. That is enough steel to build eight Eiffel Towers and fill eight Olympic size swimming pools, according to researchers from Cornell University. The environmental impact of “full-service” burial, including a casket, vault, tombstone, and flower wreaths, is considerable. Most cemeteries now have little space for native plant or animal life. The danger of mercury and particulate emissions from crematoriums is also a concern.

People who choose green burials don’t use concrete vaults, traditional coffins with metalwork or any embalming chemicals. Instead, the body is wrapped in biodegradable shrouds or placed in a pine coffin and laid to rest where it can decompose and become part of the earth.

Other options are available for green caskets, often called ecoffins. These coffins can be made of bamboo, pine, woven willow, recycled cardboard and even cord from dried banana plants. Green burials can be less expensive than conventional funerals because they do not incur the costs of embalming and metal or expensive wooden caskets. 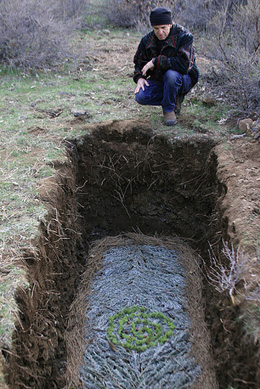 Dying to do the right thing

Synthetic fertilisers have helped fuel a food boom over the last century, but they also contribute greatly to climate change. There’s now a growing drive for a return to the ancient practice of using human waste as fertiliser. It’s an idea that is catching on, and it could help to contain our climate problem.

Human waste is full of nutrients. In a year one person produces the equivalent of about 6kg of nitrogen fertiliser, and a lot of phosphorus. Experts say that’s enough to replace a big chunk of the world’s synthetic agricultural fertilisers, which currently cause massive pollution problems when it comes to recycling.

Beyond that, there is the question of saving energy. It takes lots of electricity and natural gas to make synthetic fertiliser, and the process produces huge amounts of greenhouse gases.

In the US, the production and transportation of fertiliser accounts for a third of the energy used for growing crops. Synthetic fertilisers also produce the powerful greenhouse gas nitrous oxide. Replacing them with nutrients from human waste could be a great benefit for the plant.

Recycling human waste into fertiliser makes a lot of sense, but only if it’s done safely. Sewage needs to be composted for nine to 12 months to let the pathogens die off. The World Health Organisation recommends using gloves and boots when working with human waste. Spreading the knowledge of safe practices could change the way we think about human waste and help to combat climate change. 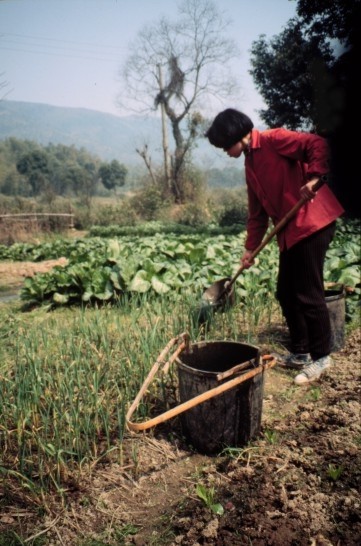 Don’t waste your waste: China’s farmers have used human manure as fertiliser for thousands of years