by GG van Rooyen
in Franchisors
0

Spur’s Got A Taste For Success

Make Your Business A Good Neighbour

New technologies are placing more and more industries under threat. Always keep an eye out for disruptors.

“Electro Muscle Stimulation (EMS) gets you fit and healthy in a short amount of time and keeps your body in shape,” says Body20 founder and MD Bertus Albertse.

“This exclusive beauty and sports technology is made in Germany and pushes the effect of your workout to another level. Muscle structure gets strengthened, fat cells get burnt effectively and the joints are spared. Moreover, workouts are short. Impressive results can be seen with one or two 20-minute workouts a week.”

In fact, the EMS proposition can seem too good to be true. For those used to spending hours in the gym, it can seem unrealistic to spend less than an hour in the gym every week, yet still see gains. Even Body20 founder Bertus Albertse was sceptical when he first came across the technology.

“I come from a fitness and bodybuilding background,” says Albertse. “I first heard about the technology while competing overseas, but I didn’t believe the hype. I didn’t think it could work.”

In 2012, however, Albertse came across the technology again. And this time he realised that it was set to change the fitness landscape. It impressed him so much that he decided to launch the Body20 franchise, powered by EMS technology from German company Miha Bodytec.

“In starting this franchise now, we’re early adopters of the technology, but I have no doubt that it will become commonplace. Every single person who tries it is blown away by it. You get a more effective workout, you invest less time and there’s far less chance of injury. It’s a very tempting proposition.” 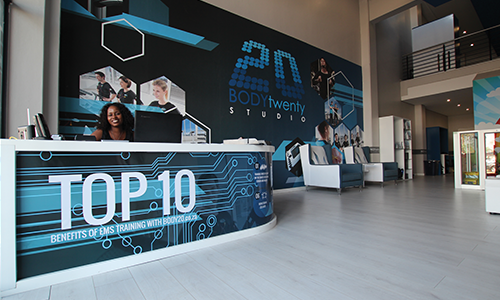 Body20 was registered in 2014, and has since already grown to more than 20 franchises, with another 10 currently in the pipeline.

“The success really has been phenomenal. It has taken off much quicker than we could reasonably have expected,” says Albertse.

According to him, it is the effectiveness of the EMS offering that has led to rapid franchise growth.

“Virtually every franchisee started off as a Body20 client,” says Albertse. “Because they personally had so much success with the system, they realised that there would be a market for what Body20 was offering.”

Until now, Body20 has been focused on setting up franchises in Cape Town and Pretoria, though the company is now throwing the net wider and looking to move into other parts of the country. Predictably, Johannesburg is a particular focus.

“We already have a couple of franchises in Johannesburg, but we definitely want to expand,” says Albertse.

Appeal of the franchise

“The advantages are low staffing requirements, fast break-evens and impressive returns. We’ve had franchisees who managed to break even in as little as two months.”

“The appeal of a stronger, fitter you in only 20 minutes per week attracts potential members, while the expertly designed layout of each club appeals to investors by utilising space and resources efficiently, so that owners are not paying for space and utilities that go unused,” continues Albertse. 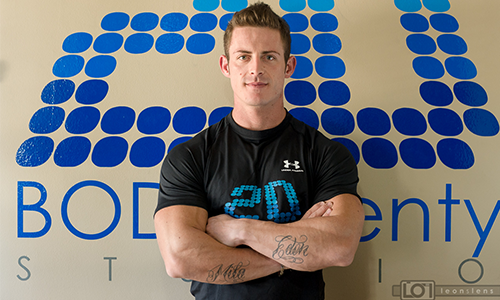 “We, as the franchisor, offer centralised customer billing and collections through the latest electronic banking and debit recovery systems to ensure memberships are collected accurately. Reduced admin means franchisees can focus on sales growth and customer experience.

“Once your application has been approved and the licence fee has been settled, the site-selection process will be underway,” says Albertse.

“When a suitable site has been approved and a lease signed, your Body20 development manager will co-ordinate your studio construction. Studio builds take two to three weeks to complete, and studio sizes can vary from 30m2 to 120m2, depending on licence type. Once operational, break-even should be reached within the first six to nine months, and 18 months is the norm for return on investment.”

Who is the franchise aimed at?

“Generally speaking, the franchise will appeal to people who are interested in health and fitness,” says Body20 MD Bertus Albertse.

“However, no formal fitness experience or qualification is necessary. Owners and employees of a Body20 franchise do not act as personal trainers to clients. The technology does all the work – it literally fulfils the role of a personal trainer.

“Moreover, we provide loads of training and support as well, ensuring that franchisees can differentiate themselves in the very competitive health and fitness industry by being leaders in a totally new fitness concept – electro muscle stimulation (EMS). 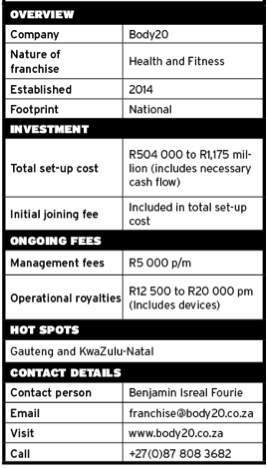