by Allon Raiz
in Are You Suited to Entrepreneurship
0

7 Character Traits Every Entrepreneur Can Cultivate

Everybody Is An Entrepreneur: How To Stay On Top

The natural world has always been a source of inspiration for artists, writers, engineers, and people engaged in a whole host of human endeavours. Entrepreneurship is no different in this regard.

Personally, I have found two very different creatures inspirational as examples of the entrepreneurial mindset at work in nature.

I don’t mean the classic examples of the ant, hoarding away food to make it through winter, or of the rigid hierarchies in a hive of honeybees, where systems and processes ensure that the whole colony survives while honey production continues unabated.

Rather than the honeybee, as an entrepreneur I am attracted to a story about its distant cousin, the bumblebee.

According to this story, an aeronautical engineer once did a calculation about the aerodynamic capacity of the bumblebee and discovered that the surface area of the bee’s wings and the force that the bee’s muscles can generate are in fact too small to lift the weight of the bee – aeronautically speaking, the bumblebee should not be able to fly.

But fly the bumblebee does, blissfully ignorant of its scientifically calculated limitations.

Whether this story is true or not, the bumblebee reminds me of a number of entrepreneurs, including myself.

When I started Raizcorp in 2000, it was because it seemed the best thing to do for a group of entrepreneurs who had asked me to help each of them grow their businesses.

I certainly didn’t know that what I had created was a business incubator. Ironically, if I had known that I would be creating an incubator, I probably wouldn’t have done it – had I followed incubation best practice models from a number of countries, I would have discovered that it was thought almost impossible for a business incubator to be profitable. It may have taken a while, but Raizcorp, despite its incubator nature, certainly is profitable!

What does this say about entrepreneurship? Simply put, entrepreneurs are able to break paradigms – even if they don’t know that they are doing so at the time.

In many instances, in fact, it is because they don’t know the paradigm that they are able to transcend the constraints perceived by others. When people buy into a paradigm, as most people do when the experts tell them what can’t be done, they shut down avenues of thought without even exploring them.

Such uncritical acceptance is completely at odds with the characteristic talent for lateral thinking that successful entrepreneurs display.

Another example of a bumblebee entrepreneur is Pierre Omidyar, the multi-billionaire founder of eBay. eBay, originally called AuctionWeb, was a pet project for Omidyar, and it initially comprised just one page hosted on his personal webpage. 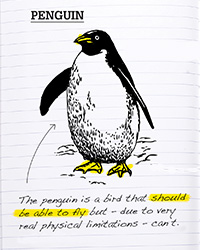 The growing popularity of the site eventually led Omidyar’s Internet service provider to demand that he upgrade to a business account to cover the number of hits he was receiving. Omidyar could not afford the $250 per month fee the account would cost, so he was forced to ask eBay users to pay.

Despite the fact that digital marketing experts of the time were convinced that no one would pay a fee for the privilege of bidding in an auction (especially for a broken laser pointer), Omidyar decided to test the waters and ask his early adopters to pay for the service his site was providing.

Far from chasing users away, this action soon led Omidyar to raise the money to hire his first employee – simply to handle the number of cheques that were arriving for fees!

However, not all animals are able to fly in the face of preconceived notions like the bumblebee. Sometimes, in nature as in business, constraints and limitations are real. In such instances, an entrepreneur need only look at a second animal to draw further natural inspiration.

The penguin is an example to entrepreneurs about what to do when the experts are right about your limitations. Understanding their aeronautical limits, penguins don’t even try to fly. But their ancestors didn’t give up – they adapted.

Their wings, feet, feathers, and beaks evolved over the years, allowing penguins to become extremely efficient at swimming, instead of flying. Penguins represent the following entrepreneurial mindset: If your model doesn’t work the way you anticipated, then adapt and make it work in an unanticipated way.

This mindset is also behind a number of successful tech entrepreneurs – it is the attitude that allows entrepreneurs to pivot their businesses when it becomes clear that they are failing in their original intent. For example, Flickr started out as an online role-playing game; Instagram hatched from a check-in app with gaming elements; and Pinterest developed from a retail browser with online sales notifications.

Bumblebees and penguins are therefore symbols to me of two entrepreneurial approaches to limitations. Bumblebee entrepreneurs – whether through ignorance or a deeper understanding than others have – transcend the limitations that others see, whereas penguin entrepreneurs take what they have and figure out how to make it work in ways that make these limitations meaningless. Who needs to fly when swimming can also bring you success?

Allon Raiz is the CEO of Raizcorp, the only privately-owned small business ‘prosperator’ in South Africa and the only South African Enterprise Development faculty accredited as a Centre of Excellence by the UK-Government approved Small Firms Enterprise Development Initiative (SFEDI). In 2008, Raiz was selected as a Young Global Leader by the World Economic Forum, and in 2011 he was appointed for the first time as a member of the Global Agenda Council on Fostering Entrepreneurship. Following a series of entrepreneurship master classes delivered at Oxford University in April 2014, Raiz has been recognised as the Entrepreneur-in-Residence at the University of Oxford’s Saïd Business School. Follow Allon on Twitter.