by Alison Job
in ExpertHub Today
0

The birth of a son to Prince William and his wife Kate has given the English royal family brand a much-needed boost.

As a brand, the royal family is an iconic emblem of the United Kingdom. However, the monarchy is not universally popular and there are those who believe the UK would be better off without it.

Despite this, the younger royals are extremely popular and the marriage in 2011 of Kate and William was well received by all. In fact, the hype surrounding their wedding has only been surpassed by that around the birth of the next heir to the throne.

Kate’s pregnancy and the birth of her child were both handled impeccably by the palace’s PR officials, maintaining respect for the royal couple’s privacy, while releasing sufficient information to at least partially satisfy the public’s insatiable thirst for information about the royal birth.

An heir is born

Champagne corks popped on 22 July as Britain welcomed the birth of a baby boy who will be third in line to the throne. The future king was born at 16:24, weighing 3.75kg, at St Mary’s Hospital in central London. 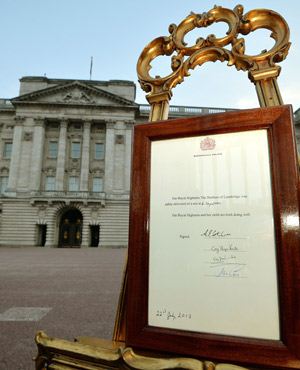 In line with royal tradition, a brief statement was posted on an easel outside the palace, announcing the time of birth, the infant’s gender and that mother and child were doing well. It gave no information about the baby’s name, and officials say that a name will be announced “in due course.”

Outside the hospital, a town crier in traditional robes and an extravagant feathered hat shouted the news and rang a bell.

Baby Cambridge is the first royal heir to be born in the 21st century, and the world has changed a great deal since the last royal birth. Despite advances that include the internet and social media, any royal birth is still entrenched in centuries-old tradition.

As it has always done, the British royal family placed a framed notice outside the palace. However, after the initial announcement was made in a press release, officials also posted the news on Twitter to millions of followers worldwide.