What To Do When Your Product is the Butt End of Jokes? Join in on the Laughter

Despite big demand for your product sometimes it can get the bad end of the stick when it comes to market’s perception, which is something that Getty Images has encountered in the world of stock images.

Everyone and their smartphone is capable of creating a micro stock photo depository, and cheesy stock photos (like the one below) have become the butt end of jokes, which is why it’s not surprising that Getty Images decided to do the next best thing. Laugh along.

Vince Vaughn and his co-stars teamed up with iStock by Getty Images to create a set of hilarious stock photos as promotion for their upcoming movie, Unfinished Business. 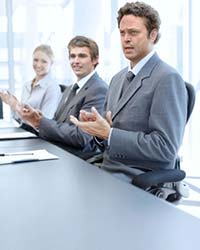 The images began appearing on social media platforms and as a download for editorial use. It’s a clever marketing concept: Marketing both the movie and Getty Images, even if it is in a tongue-in-cheek kind of way.

“Unsexy” brands often struggle to market their products; here are three neat tricks to turn your disadvantage into your greatest strength:

Listen to what your audience is saying about your product and, where relevant use this to your benefit. Getty Images nailed this one on the head, creating completely cheesy images that are sure to go viral.

2. Create social media campaign that engage with your target audience

Understand the core values of your products, not just the product itself but rather how it affects or improves people’s lives. Tampax took the opportunity to focus on encouraging women to remain active during their period. They launched an Awesomely Active Girl Challenge on their Facebook and Twitter accounts encouraging women to post pictures of themselves being active.

Your social media platform should mainly be used for connecting with your potential customers. A US office supply store, for example, uses their Twitter to remain funny and conversational, without focusing on product or promotion. They currently have 306 000 followers on Twitter.

Catherine Bristow Scott is the Content Division Manager for ExpertHub and Entrepreneur South Africa. With specialist expertise in developing SEO content, effective sales enablement content to drive lead generation, as well as digital strategy, Catherine brings an in-depth understanding of developing both written and video content to assist businesses in remaining competitive and growing their revenue.