by Monique Verduyn
in Snapshots
0

Since the late 1800s, the Durban July Handicap, held on the first Saturday in July at the world-renowned Greyville Racecourse, has been one of South Africa’s most prestigious sporting events, attracting hundreds of local and overseas visitors.

What people love about it is that it’s so much more than sport – it’s also a glamourous social get-together and an over-the-top fashion spectacle that gives the country’s fashionistas an opportunity to show off outrageous outfits.

It’s also a day that offers enormous potential for anyone with the imagination to leverage all the elements that make up the spectacle. That’s what caught the attention of Paul Veltman, founder and MD of Velti Events.

In his case, Veltman stresses the importance of truly leveraging an event like the Durban July.

“In terms of what it offers, it’s comparable to the best sporting events around the world, especially because it comprises so many different elements, from hardcore horse racing to fashion, music, entertainment and lifestyle – there’s something for everyone. That makes it an excellent opportunity for almost any brand that is targeted at LSM 7 and upwards.”

He notes that providing value for money for the sponsors of this type of event is critical. “If a sponsor gives you R1 million towards an event of this level, make the best possible use of that money and turn it into R2 million worth of value.”

Veltman, who has been involved in eventing and nightlife in South Africa, Australia and the UK since his teens, launched his business in 2010, after a stint in London where he got involved in the recruitment of high-end marketing directors – an experience that proved to be a great learning ground for him. 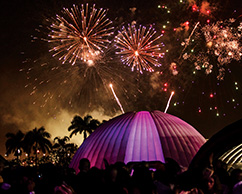 “I left London after the economic downturn and decided to return to South Africa to pursue my passion, which is eventing. I was lucky enough to have saved the cash needed to get the business up and running. From the beginning, our model has been to work only with top-end, blue chip, large corporates. Unlike other events and hospitality companies, which typically have hundreds of clients, we have around 35, and all of them are high-value. That is what gave us the opportunity to go out into the market and find sponsors for the experiential event we wanted to create at this year’s Durban July.”

Velti Events already had a track record of success at the Durban July, having held events there in 2011 and 2012. “As a result, we were able to secure some great sponsors for the 2013 event. We partnered with MTV, Fish Eagle, Playstation 4 and Wella Koleston to create the most amazing site ever to grace the lawns of the Durban July.”

The event was a major contributor to the company’s R35 million turnover this past financial year, an upswing of 50% over the previous year. 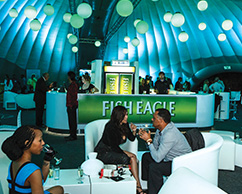 With the sponsors on board, Velti Events was able to create the ultimate racecourse getaway – an inflatable village with a scale of more than 8 000m2 and spread over six giant inflatable domes.

“Set just a few paces away from the racecourse, the village combined futuristic glam with cool comfort and hot entertainment,” says Veltman.

“Named the Eagle Air Village, it delivered the best entertainment experience for race-goers, providing non-stop fun for music lovers, fashionistas and gamers. Spectacular décor and staging were complemented by great service,and themed zones, including a PlayStation Man Cave complete with a sports bar and gaming consoles, and a Wella Koleston Pamper Zone with champagne bar and glam cam for the ladies.

“We created an environment that was fun and exciting, with fireworks and special effects. Every touch point spoke to the Eagle Air theme, with visitors having different classes of tickets, and all staff dressed as air stewards and hostesses.”

Sounds decadent, opulent and a lot of work to pull off, doesn’t it? Veltman and his team had to raise more than R5 million in sponsorship from the global brands PlayStation and Wella Koleston to make this vision a reality.

Ask any entrepreneur who’s ever tried raising funds, and you’ll know this is no easy task. But what really took the event to a whole new level was securing MTV (Viacom Networks) as a media sponsor. Over a period of four months before the event, the television channel provided an R8 million above-the-line campaign to promote Eagle Air Village.

It was the joint venture partnership with MTV which actually enabled Velti Events to secure Fish Eagle Brandy (which was being revamped at the time), Wella Koleston and PlayStation as key sponsors. For the 2011 July Handicap, Veltman signed a deal with MTV, making his the first events company to bring a media partner on board.

That year, they won the award for best hospitality marquee. It had been MTV’s first foray into KwaZulu Natal, so the company was delighted. That was the basis for the conversation around what to do in 2013.

“We took the decision to completely customise the event around our sponsors instead of forcing the sponsors to fit in with us and our model,” he says. “Even though this process was extremely intricate, it was also one of the main things that made our offering different and highly investable.”

The partnership between Velti and MTV meant that all below-the-line elements, including the national pre-activations, the entire Eagle Air Village creation, the actual event execution and ten months of planning would be Velti’s responsibilities; all the above-the-line elements – along with the artists and television production would fall under MTV’s remit.

“It was a partnership that just worked, and we became like one big family, with everyone having input into everything throughout the course of the project,” says Veltman.

The other differentiators included the fact that Velti Events created a true through-the-line campaign which gave its sponsors tremendous value and included exposure on television (MTV, MTV Base, VH1 and Comedy Central), radio (East Coast Radio and YFM), in print (newspapers, magazines, posters, billboards), and through 100 national activations around the country, as well as a huge social media and online campaign spread across multiple platforms, all leading up to the event itself.

This was also all tied into an optional three-year contract which meant the sponsors could turn this into an annual event in their calendar. The feedback from those who attended was so positive that Fish Eagle Brandy jumped at the chance and signed with Velti Events for future races.

“The total campaign could easily be valued at more than R25 million,” says Veltman. “The key to our success was to maximise the unique partnership between Velti and MTV. That’s really how we were able to produce the event and the media offering at our cost while still creating one of the most unique and experiential sites at the Durban July, with a high-spend media campaign behind it. It was this strategy that enabled us to provide our sponsors with more value for their money than we all thought possible.”

To carry off an event of this nature requires a business like Velti Events to have all the right processes in place. “We have spent a lot of time and energy on getting the internal workings of the business spot on.

An event of this nature requires massive cash flow. We had to be ready to carry millions for up to 90 days. We are able to do so because of the relationship we have developed with our bank.” 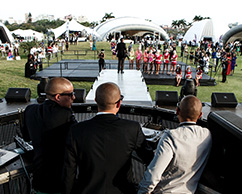 Veltman says with consumers more and more adept at skimming through media clutter, marketers are constantly seeking new, inventive ways to cut through advertising mess and make an impact.

With people’s attention spans growing shorter and their expectations continuing to rise, creativity and production values are amping up. That’s where experiential marketing comes in.

“To set yourself apart you have to be really different and create truly unique experiences. It’s not just about ‘doing an event’. There’s little money to throw around these days, so any type of marketing a company does has to offer a return on investment. Experiential marketing offers that through tangible, tactile engagement and activation.”

Experiential marketing programmes allow consumers to become active participants in the brand’s marketing effort. If well planned and executed, they can be very memorable and relevant, and can result in a positive change in consumer behaviour, encouraging people to make a purchase or change their brand preference.

“A consumer event like the July Handicap is the perfect backdrop for an experiential marketing programme. It enabled us to bring the sponsors together and let them offer sampling and live hands-on product demos. This allowed consumers to touch and use their products rather than just hearing or reading about them – you’re interacting with people rather than merely talking to them. It’s an opportunity to take experiences further by including the types of fun activities we offered.”

The idea, he says, is to create real value through strong partnerships and joint ventures and turn that into an offering that is so unique and quantifiable that big businesses can’t refuse.