The Rise Of The Founder-CEO Firms

According to Ovidiu Patrascu, Sustainable Investment Analyst at Schroders, the tendency is more common among initial public offerings (IPO) with 30% of the companies listed globally over the last five years being led by their founders. “In those cases where track records are limited, the role and effectiveness of business leaders is often judged by intuition more than analysis,” he says.

Patrascu goes on to state that the issue is expected to become increasingly important: “Companies can scale quicker than ever in capital-light, global industries. With venture capital war chests still strong, public market capital is little impediment to scaling a good idea quickly.”

He suggests that in addition to this, the prevalent internet usage enables companies to quickly tap global customers, employees and suppliers, bypassing the conventional expansion from local to national to international. “As a result, it is increasingly likely that the founder will still be in charge by the time IPO scale is reached,” says Patrascu.

Patrascu explains the approach Schroders took for this particular research: “We set out to explore whether companies led by their founders tend to take a more long-term approach in capital allocation, enjoy superior profitability or perform better than peers. We examined 3,600 non-financial companies with market capitalisations over $500 million.

“Approximately 70% of founder-led companies are listed in the US, followed by China (8%), Japan (7%) and Europe (6%), and the majority operate in the technology, pharmaceuticals and retail sectors (source Bloomberg 31 Dec 2016).”

According to Patrascu, the research demonstrates that in general: 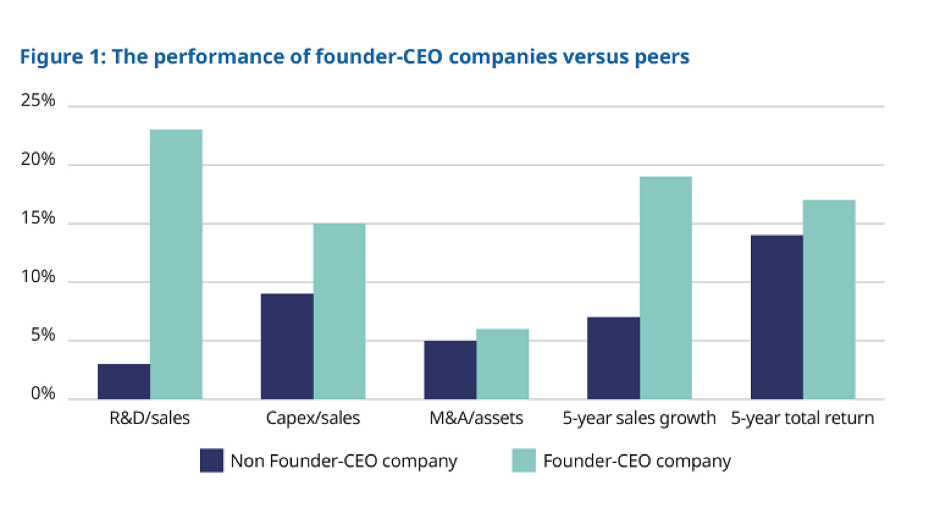 However, Patrascu points out that the findings become more nuanced when looking at specific sectors in more detail.

“Founder-CEO companies operating in innovation intensive sectors such as internet, software, biotechnology and pharmaceuticals tend to invest more in R&D, capex and M&A than their peers. This often leads to better revenue growth, but not to share price outperformance,” he explains.

According to Patrascu, in more capital intensive industries such as hardware and semiconductors, founder-CEO companies tend to allocate capital more conservatively, and their share prices have generally outperformed their peers.

“In some mature but profitable industries, such as electronic & electrical equipment, founder-CEO companies allocate more capital but at relatively high levels of profitability. This leads to strong compounding power and share price outperformance,” he says.

According to Patrascu, founder-CEOs are often found in the most exciting areas of the market. He concludes that by objectively examining their influence on capital allocation and investment performance, Schroders’ investment teams are better able to focus research efforts into specific sectors where founder-CEO companies are more likely to outperform their peers.